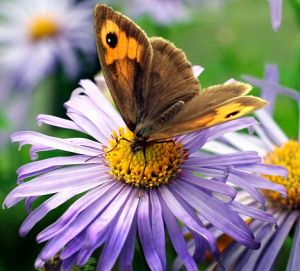 I have been looking back over old blog posts recently. My latest posts have focused on the First World War and issues I address in Shell Shocked Britain and readers of this blog know how much I love to discover new poems and poets; a wander around the Poetry Archive website being my favourite form of procrastination. This despite rumours that Bejewelled Blitz is my distraction of choice…

It is cool in Somerset today; nothing very new in that, but it really has felt as if ‘warm days will never cease’ in recent days. Autumn is a season I enjoy as a rule, only slumping into a depression after the new year, when I find the evenings truly dark, and the mornings little better. But it still feels a little early for To Autumn by John Keats (as much as I love it) so I thought I would post a poem I have only recently discovered. I think it neatly sums up the late summer feeling that persists despite increasing evidence that autumn is truly upon us. It is by American poet and translator Jennifer Grotz.

Before the moths have even appeared
to orbit around them, the streetlamps come on,
a long row of them glowing uselessly

along the ring of garden that circles the city center,
where your steps count down the dulling of daylight.
At your feet, a bee crawls in small circles like a toy unwinding.

Summer specializes in time, slows it down almost to dream.
And the noisy day goes so quiet you can hear
the bedraggled man who visits each trash receptacle

mutter in disbelief: Everything in the world is being thrown away!
Summer lingers, but it’s about ending. It’s about how things
redden and ripen and burst and come down. It’s when

city workers cut down trees, demolishing
one limb at a time, spilling the crumbs
of twigs and leaves all over the tablecloth of street.

Sunglasses! the man softly exclaims
while beside him blooms a large gray rose of pigeons
huddled around a dropped piece of bread.

The penultimate stanza, with its line ‘spilling the crumbs of twigs and leaves all over the tablecloth of street’ (though I am not sure why it isn’t  ‘the street’, and am not sure I like it – any thoughts?) conjures up the tiny remnants of dead wood that refuse to find their way into the rubbish bag however hard one sweeps, and seem a metaphor for those last days out in late summer.  Those romantic and organised enough to have proper picnics will have made their sandwiches and pies, eaten them under the branches of sleepy trees  and have spilled the crumbs into the folds of the screwed up gingham cloth (or, more likely an old rug) which, when opened in the spring of the next year, will find the same crumbs clinging, desiccated, to the fibres. And ‘sunglasses!’ – how nice it is to find we still need them on into autumn as the sun burns early mist away and casts a gentle light over the afternoon.

Is it about ending? I am not so sure. How can we call it that, with a quarter of the year yet to come? 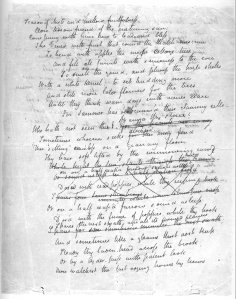 At the end of March a blog appeared on the Oxford University Press website explaining the work behind a paper just  published in The Review of English Studies. The blog is entitled ‘A Keatsian Field trip’ and was written by Richard Turley, Jayne Archer and Howard Thomas, authors of the paper – ‘Keats, ‘To Autumn’ and the new men of Winchester’.

Despite the fact that it is hardly the time of year for considering the maturing sun or ripening fruit, such is the fame of the poem and its indelible place at the top of any list of great English poetry that the findings of this paper made national news.

Under such headlines as Ode to NCP? (typical of the Daily Fail) or Keats’ rural idyll now a car park, various British papers drew attention to the new possibilities raised by the authors of this paper – what was the inspiration for this great Ode ?

Previously considered as allegorical, commentators keen to highlight Keats’ interest in politics have generally assumed that his daily walk across  Winchester’s water meadows saw him take the fields around him as a representation of those recently trampled under the Peterloo Massacre. Or they were seen to symbolise the general state of British agriculture in the first twenty years of a century that was to see such a radical shift from agrarian economy to urban sprawl and financial speculation.

END_OF_DOCUMENT_TOKEN_TO_BE_REPLACED

I love autumn, even in these earliest days of the season. It is not just now, as I (reluctantly) accept that I am middle-aged. I have always loved the colours, smells and celebrations in the months up to Christmas. The painting (left) by Millais – ‘Autumn Leaves’ – is said to represent the passing of youth and beauty, or perhaps the loss of innocence as the harsh realities of decay surround the young women as they light a bonfire in the twilight; but it is stunning.  Ever since my teens, hearing Justin Hayward sing ‘Forever Autumn’ I have delighted in the change of seasons from the seeming inevitability of a disappointing summer to the cosy glow of the latter part of the year.

I admit I would love it a little more if it would just stop raining, but it is a season of striking beauty and one in which you can imagine ‘four seasons in one day’. In the Lake District last week we experienced gale force winds, flinging leaves and branches in our faces as we walked; thick mist; freezing hail and a day of blissfully warm sunshine. It was a little early to witness the forests in shades of gold and red but the first hints were

there. The bushes were thick with autumn berries and nestling beneath the canopy were huge red and brown fungi – agaric, bracket and tiny brown mushrooms like Maltesers on fragile stems. The bracken on the fellsides was turning and as the sun came out and warmed up the wet fronds the smell was intoxicating – evocative of all the wonderful walks we have had there over the years.

Readers of my blog know of my love of the poetry of John Keats. His ‘Ode to Autumn’ written in 1819 is a true classic of English literature and is so much more than the oft-quoted first line ‘Seasons of mists and mellow fruitfulness…’. For example:

END_OF_DOCUMENT_TOKEN_TO_BE_REPLACED

The prompt for Week 35 of the Gallery at Sticky Fingers is ‘Before & After’. It wasn’t an

easy one for me – my children are now teenagers and have moved through so many stages that I can’t choose from the myriad photos I have of them in albums, drawers, the loft and on the PC. I haven’t recently had a makeover or done any decorating. There was also the added issue of being asked to take a new photo especially for the prompt, and my family are hopeless at being obliging in that respect.

So having seen the devastation in Cornwall today, and having experienced high winds and torrential downpours here in Somerset I thought a trip out to one of my favourite spots – the Wellington Monument high on the Blackdown Hills – was in order. We were there just three weeks ago, when I took the first of these two shots on my SLR. The second one, taken from more or  less the same place, is what it looks like now and is taken with the phone on my camera.  Three and a bit weeks and about 10 inches of rain and gale force winds have turned a picture of what could almost be late summer into one that is not even a season of mists or mellow fruitfulness anymore. END_OF_DOCUMENT_TOKEN_TO_BE_REPLACED

The theme for this week at Sticky Fingers Gallery is ‘seasons’. I am sitting here writing this post, looking out of the window over the garden as gale force winds and squally showers fling the last few leaves from the rose bushes and I am fearing for the bird table. Something tells me it could be half way up the street feeding the robins in someone else’s garden by this evening.

It is most certainly autumn, and not really the autumn of ‘Seasons of mists and mellow fruitfulness’ anymore. It has a wintry feel about it now; the nights are drawing in and we bought our Christmas cards at the weekend. The one we always receive first, from an old college friend of Peter’s, will be with us in two weeks time with the newsletter telling us of the minutiae of her life over the past twelve months. Where have those 52 weeks gone?

At the weekend we went for a walk in our local park here in Wellington. The Park was a gift from the Quaker Fox family to the town in 1903 as a memorial to the coronation of King Edward VII. It is Grade II listed and it is utterly fabulous. It has the prettiest little house in it, with a beautiful Arts & Crafts style stone tablet embedded in the brickwork and there is  a bandstand still used on a regular basis in the summer. Children and adults alike love it, many sitting above the ‘ha ha’ (to which our attention is quickly drawn as an historic but rather dangerous feature as soon as you walk through the gate), to watch local football matches on the rec, of which you get a great view. It is a long way down…..

END_OF_DOCUMENT_TOKEN_TO_BE_REPLACED

I am still on holiday here in lovely Suffolk, but it now feels a little less like a summer holiday at all. Combine harvesters are working late into the evening to bring in the fields full of wheat before the next downpour, hedgerows are full of things other people could probably make something delicious out of and paths and lawns are covered with maggoty fallen fruit. Relaxing in a beer garden with a pint has become all but impossible, although Peter is trying very hard to get over his fear of being eaten alive by killer wasps. I have, after all, been defending him bravely by trapping them under empty glasses. We must make an odd sight as we get up to leave. ‘One, two, three RUN!’ I shout to man and dog as  I let all the stripy assassins go free. Chris Packham would be proud of me.

Seriously, something is definitely different this, our second week. Walking around the 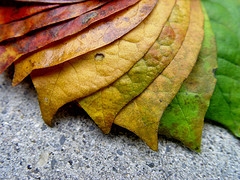 beautiful town of Lavenham there was the all-pervading smell of wood smoke as the first bonfires of fallen leaves and twigs had been lit. The light has changed too. It seems softer, more golden as it moves across the fields. It still lingers in the evenings, but it is cooler earlier now. Perhaps I am just relaxing as the holiday continues and everything feels more mellow, but the trees look a little tired frankly and there is definitely a brown tinge to the leaves of many of them around these parts. On the wet days the smells of decaying vegetation are unmistakable – the bracken has a wonderful earthy smell that is more redolent of October than August.

END_OF_DOCUMENT_TOKEN_TO_BE_REPLACED

Promote your Page too