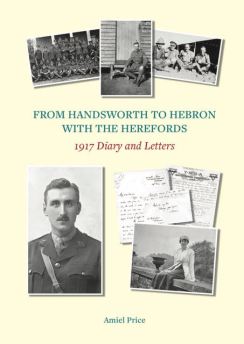 I wrote, before Christmas, of my concerns that post-Armistice Day centenary commemorations, the wonderful stories that are part of the heritage given to us by the Great War, would cease to interest the media. Despite there being much to learn from 1919 onwards, and the ongoing trauma experienced by soldiers and civilians alike, it does seem I might be right. Media stories of projects ongoing are thinning out and the Brexit horrors have overtaken almost every other subject in the news. So I have been determined to continue to run stories and examine themes from the Great War.

One of the consequences of writing Shell Shocked Britain (published Pen & Sword in 2014) was that I got to know some really interesting people, with fantastic stories to tell. One such is Amiel Price, who published her own book last year, entitled From Handsworth to Hebron with the Herefords. 1917 Diary and Letters. She had inherited a store of letters and diaries from her grandmother, also called Amiel and she shared them with me before the book came out. I was fascinated by the stories revealed, the love of the two young people heightened by the war and the wonderful cartoons and photos that illustrated it. I was also keen to hear more of life in the army away from the Western Front, in Egypt, a part of the world many don’t realise was affected. I was thrilled when Amiel asked me to write the Foreword, and I am equally thrilled to welcome her to the blog today.

A few years ago I inherited various letters and photographs belonging to my maternal Grandmother, Amiel Robins.  Many were dated from 1917.  I had seen some of the photographs before, and I knew about the letters but had never read them.

Years ago my Mother had shown me a brown and black album containing photographs of Granny and her friends in fancy dress.  They were a stunning collection of professional black and white photo postcards showing the girls in their various costumed sketches.  She explained that Granny had been in a concert party called ‘The Allies’ that had put on many performances to entertain wounded soldiers in Birmingham.  There were photos of Granny dressed as ‘Burlington Bertie from Bow’ and as ‘England’ in a union flag costume.  Indeed we still have this flag costume which I have worn myself for the Queen’s Diamond Jubilee and for the 2012 Olympics.

I also knew that Granny had had a fiancé called Norman Wells who had been killed during the First World War.  We still have his photograph which was mounted in a silvered frame embossed with the emblem of his Herefordshire Regiment.  As I understood it this large framed photograph had always stood on Grandfather’s dressing table in his memory.

In a small attaché case I found more photographs, some of them quite small and depicting a WW1 soldier in the desert.  Elsewhere there were photo albums of pictures of Norman and Amiel together in her garden or the countryside.  There were also two small notebooks, which turned out to be Granny’s diary for 1917 and her copied out version of Norman’s diary for October to December of the same year.

As the commemorations to mark the centenary of the First World War were about to begin I realised that now was the time to sit down and read through the letters.  These were all written by Norman to Amiel from December 1916 when they met, right throughout the year to Christmas 1917.  He wrote almost every other day in a beautiful hand that was easy to read.  He described what he was doing in camp, how he felt about Amiel and about his hopes for their future together.  It was the most poignant and fascinating read.  It was so evocative of that era and gave such an insight into Norman’s war.

As Amiel and Norman lived in Handsworth, Birmingham, I had assumed that there was no connection to Wales and where I lived, but no – I was surprised to find that Norman came to camp in Singleton Park in Swansea.  He described the camp and the seaside and walking to Mumbles and Langland Bay, which is where, as it happens, our family came to live fifty years ago. 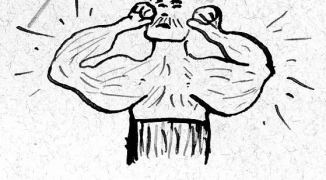 So – what to do with this amazing collection of letters, photographs, and even drawings, as well as the diaries and a costume?  Even now I’m not sure, as I would be sorry to see it all disbanded and ending up in different places.  I started by typing up the letters and diaries in order to share them with my cousins so that they would also know the story from their Grandmother’s early years.

But as I typed and looked up things I didn’t understand, I was telling my friends and colleagues little snippets about Amiel and Norman.  They became intrigued and found it all so interesting that they persuaded me that other people would be interested too, and so I began my work in earnest to produce a book, the publication of which would coincide with the period of the WW1 anniversary.

The other reason I wanted to share this story is that it helps to tell some of the story away from the Western Front.  So much coverage, understandably, has been given to the First Word War in France and of the major battles that we have missed or forgotten about the war in Egypt.  Not only that but even less has been told of the ordinary soldier’s life in training camp or in a desert camp.  The hardships, the boredom, the shortages, the dreadful weather.  All topped by the longing, the desperate longing, for letters from home.

Although the story is a very personal one about a young couple’s love for each other, it is set in a time of great upset and upheaval that affected so many people at the time and so many others in the generations to follow.  The story has resonance with us all.

If you would like to buy a copy of From Handsworth to Hebron with the Herefords the price is £9.99. For further information and to order the book contact Amiel Price on 01792 369121 or email: fronheulogbooks@gmail.com

Thank you so much for sharing your story Amiel.

Promote your Page too
Join 5,729 other followers