Before you read this post, I would love to know if, after hearing a little bit more about my next book, you can think of a fabulous, attention-grabbing title. The working title is ‘Death Disease and Dissection’ but it hardly covers it! If your title is chosen (just add it to the comments below the post) I will include you in the acknowledgements and ensure you get a free copy of the book….!!

I am actually working. Posting this is part of a proper writing day. Admittedly I have been sending lots of emails, arranging research trips and talking to people who have information that may be useful, but now I am getting words down on paper, and will continue to do so off and on for the rest of the day.

I am currently researching two commissions. The first is a book about medicine in the late 18th and early 19th centuries, focusing on  young apothecary apprentices and their education to the required standard to undertake the role of surgeon apothecary, a career roughly equivalent to present day general practitioners. In a past post I have bemoaned my lack of progress, and inspiration, but something has changed in the past couple of weeks, and writing this is, to me, a proof of  my commitment to the project.

Freely admitting that the decision to write the book was based on my love of the life, poetry and letters of poet John Keats, whose medical training influenced his short, poetic life in many ways, I am now finding out about many other men with interesting stories to tell and Keats will sit alongside other less prominent men who devoted their lives to serving their communities. 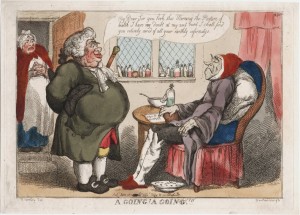 This book will examine medicine from the perspective of social, rather than medical history, but the  publisher, Pen and Sword once again, is keen to include details of the sights and smells of the apothecaries shop, the conditions he treated and the hospital training he received. So there will be pills, potions and poisons, death, disease and dissection and babies. Lots of babies. Men were midwives long before 21st century equality of opportunity. It will include tales of teaching hospitals and their relationships with the resurrectionists (or bodysnatchers), operations without anaesthetic and lives on the wards as well as in the homes of patients. If you read The Quack Doctor or The Georgian Gentleman blogs, for example, you will know there is much to wonder at (including great cartoons like the one above).

I will be gathering as much new information as I can, gleaning snippets from newspaper articles and archives. Although few medical treatments could ‘cure’ serious disease, I found many men had a high level of medical knowledge and technical expertise for the time, and although there were charlatans who might just as likely kill as cure,  I discovered that those working their way up from the making of pills and lotions to take the examinations necessary after 1815 were often more knowledgeable than those men who were wealthy enough to take their medical degrees at Universities.

Following on from my work on Shell Shocked Britain, this book has been both a refreshing new challenge and a cause of much procrastination and delay. It is due out next year, and where I seemed, in the spring,  to have plenty of time to write the research up the speed at which the year has evaporated has left me panicky and unsure of myself. I have by turns been enthusiastically researching this book, and then finding more to enjoy in the work for the one due out in 2017 on the rise of spiritualism and the need to believe in contact with the dead in the years of the Great War and it’s aftermath. Everyone loves a ghost story and I am certainly no exception, as I have published my own short collection of ghost fiction called The Marrow Scoop. Stories of fraud and abound as people tried to find a way to cope with loss and grief. Having written a chapter on the subject in Shell Shocked Britain I have done half the work already. It seemed easier to carry on.

But I am now refocused and hope to really get writing about surgeon-apothecaries in the next ten days I am spending in Suffolk to house sit for my brother-in-law, and I have ten days in Cumbria to look forward to it September so no excuses.

Get on with it woman, it is an interesting subject and one I hope people will find fascinating as I look at the GPs of 200 years ago and assess the challenges they faced in world of ever-increasing medical knowledge.

Promote your Page too