On Friday 21st March it was World Poetry Day. It is often one of those ‘days’ that passes people by, especially if they do not consider themselves a poetry lover. (I don’t think anyone truly dislikes poetry; they just haven’t found the right poet…) The UN states that World Poetry Day reminds us that:

‘Poetry reaffirms our common humanity by revealing to us that individuals, everywhere in the world, share the same questions and feelings’.

As anyone who follows this blog regularly knows, I would agree wholeheartedly with that statement. I adore poetry and like nothing better than a couple of hours browsing an anthology or looking at the Poetry Archive online and discovering someone new; or a poem that expresses just how I am feeling at that time.

A common humanity and a recognition of kinship is something I have been working through in my book, Shell Shocked Britain, which has been occupying a lot of my time recently. My editor is sending me her final edits and I am adding a few, last paragraphs that I have thought of since the manuscript was first presented in December. I have also started a twitter feed for the book and given it a Facebook page to ensure I can follow as many interesting First World War sites and projects as I can and offer tantalising snippets from the book and the research I have done for it. If you feel like following either then do ‘like’ or ‘follow’ for more details.

Anyway, as it was World Poetry Day on Friday, and because I was unable to post anything whilst in London for the day (and at the launch of Angela Buckley’s fabulous book ‘The Real Sherlock Holmes’) I thought I would offer here a poetic tribute to the shell shocked men of the Great War in the words of the wonderful Wilfred Owen. Owen was himself hospitalised at Craiglockart in 1917 to recover from neurasthenia (another term for shell shock). A chapter in Shell Shocked Britain uses line 15 as its title – Always they must see these things and hear them. It sums up the enduring trauma the men experienced, during and after the war, and indeed the whole poem expresses vividly the horrors that haunted the men that broke down, unable to articulate their pain. 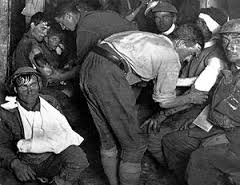 In my book I do recognise that many men came through the war and lived happy and fulfilled lives, safe with families and able to leave the war behind them. Some trod a path between the past and the futures they wanted – a narrow way that held dangers should life decide to deny them the support they needed to maintain their sanity. Others could never recover and spent the rest of their lives dismantled emotionally and physically – ‘set-smiling corpses’ that woke each day to face new torments. Ten years after the war 65,000 men were still receiving treatment and many broke down many years after the conflict ended.

These truly were ‘the men whose minds the Dead have ravished‘.

Who are these? Why sit they here in twilight?
Wherefore rock they, purgatorial shadows,
Drooping tongues from jaws that slob their relish,
Baring teeth that leer like skulls’ teeth wicked?
Stroke on stroke of pain, – but what slow panic,
Gouged these chasms round their fretted sockets?
Ever from their hair and through their hands’ palms
Misery swelters. Surely we have perished
Sleeping, and walk hell; but who these hellish?

– These are men whose minds the Dead have ravished.
Memory fingers in their hair of murders,
Multitudinous murders they once witnessed.
Wading sloughs of flesh these helpless wander,
Treading blood from lungs that had loved laughter.
Always they must see these things and hear them,
Batter of guns and shatter of flying muscles,
Carnage incomparable, and human squander
Rucked too thick for these men’s extrication.

Therefore still their eyeballs shrink tormented
Back into their brains, because on their sense
Sunlight seems a blood-smear; night comes blood-black;
Dawn breaks open like a wound that bleeds afresh.
– Thus their heads wear this hilarious, hideous,
Awful falseness of set-smiling corpses.
– Thus their hands are plucking at each other;
Picking at the rope-knouts of their scourging;
Snatching after us who smote them, brother,
Pawing us who dealt them war and madness

The images Owen uses, of nameless men reduced to’slavering’ like animals and suffering an endless purgatory, is surely a metaphor for the de-humanising effects of the war and the resultant retreat inward to a hell these ‘helpless’ men cannot escape from.

Do read this poem through a few times if you can. It is shocking in its graphic description of the men Owen was treated alongside at Craiglockhart, under the enlightened care of psychiatrist William Rivers. It is a vision worthy of Dante and surely berates us should we forget these men who reach out to ‘paw’ and ‘snatch’ at those of us who might live on without giving them a thought….

4 Replies to “‘Mental Cases’ by Wilfred Owen: Writing the horror of shell shock in poetry”

Promote your Page too
Join 5,729 other followers